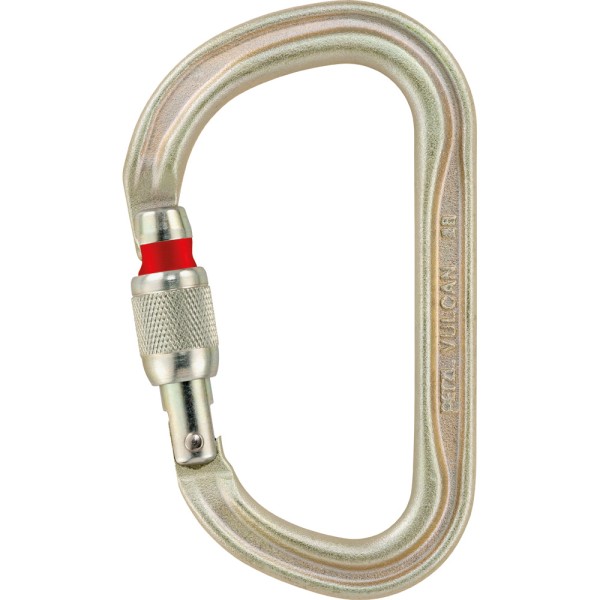 VULCAN is a high-strength steel carabiner designed for use in difficult environments. The large-capacity asymmetrical shape is ideal for setting multiple anchors. VULCAN can be connected to the CAPTIV bar to favor positioning of the carabiner along the major axis, to limit the risk of it flipping and to keep it integrated with the device.

Description
• High-strength steel carabiner for use in harsh environments, particularly suitable for setting up multiple anchors
• Easier handling:
- fluid interior design limits the risk of having a catch point and facilitates rotation of the carabiner
- Keylock system to avoid any involuntary snagging of the carabiner
- may be used with a CAPTIV positioning bar to favor loading of the carabiner along the major axis, to keep it integrated with the device, and to limit the risk of it flipping
• H cross-section:
- ensures an optimal strength/weight ratio
- protects markings from abrasion
- SCREW-LOCK: the manual screw-lock with red band provides a visual warning when the carabiner is unlocked

Um eine Bewertung abgeben zu können, müssen Sie sich zunächst anmelden.
Viewed
This website uses cookies, which are necessary for the technical operation of the website and are always set. Other cookies, which increase the usability of this website, serve for direct advertising or simplify interaction with other websites and social networks, will only be used with your consent.
Decline Accept all Configure