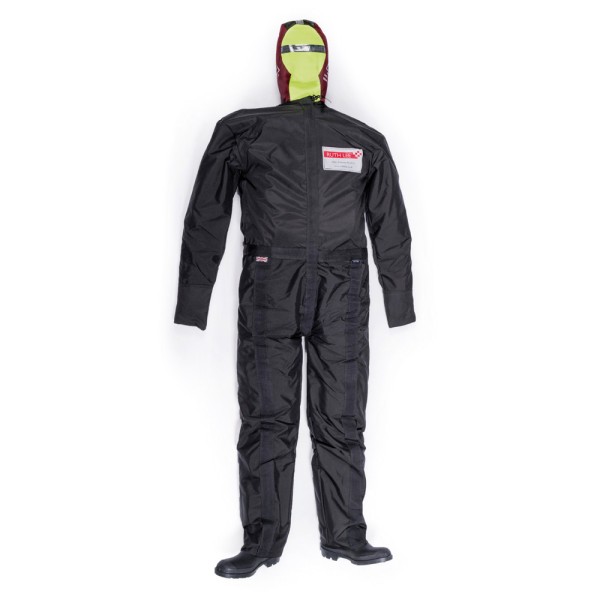 Designed as an amalgamation of the HazMat and water rescue manikin the newly released Offshore manikin is a versatile product designed for water and general rescue training on offshore platforms and vessels. The P.V.C carcass and increased weight make this model stronger and more suitable for simulating rescues from accommodation areas, engine rooms or drilling platforms - used in conjunction with the tough protective overalls, this model will withstand the rigours of general training.

While this manikin will float well in static water it is advisable to use some form of buoyancy aid in open seas or rough water. Weighing in at a respectable 60 kg when dry the offshore manikin is constructed using a P.V.C carcass with mesh to the ends of the arms, legs and head to aid drainage. As standard with any Ruth Lee Water Rescue manikin there is a polypropylene webbing loop on the back for hauling and hanging to dry as well as SOLAS reflective tape on the head.

The protective overalls are made of tough high-tenacity PU coated polyester, 320 gms (similar to the type of materials used for bullet proof vests) with high-density polypropylene webbing double stitched in the identified high stress areas.
The Offshore manikin is supplied complete with draining sturdy rubber boots; the boots help protect the legs if the manikin is dragged along metal gangways and corridors.

Whilst not providing all the features that a standard water rescue manikin would, the offshore manikin is the perfect balance between functionality and value for those who are limited on storage space.

Um eine Bewertung abgeben zu können, müssen Sie sich zunächst anmelden.
Accessories 1
Accessories 1
Ruth Lee Replacement Overall, for 60 kg offshore training dummies, black
Order number: AU-02253
€309.00
Viewed
This website uses cookies, which are necessary for the technical operation of the website and are always set. Other cookies, which increase the usability of this website, serve for direct advertising or simplify interaction with other websites and social networks, will only be used with your consent.
Decline Accept all Configure