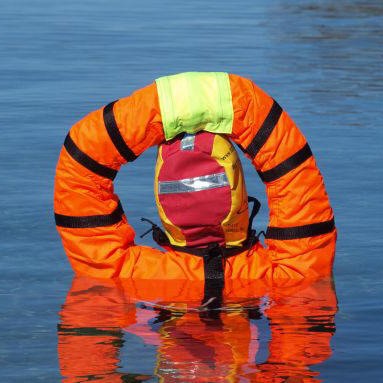 This dummy was developed with the co-operation of Surf Life Saving Australia as a water rescue dummy for IRB Racing, IRB driver training & Tube Rescue practice. After two years of development, several prototypes and extensive testing they were delighted with the result. During the testing the dummy was also found to be suitable for Jet Ski rescue training and other general rescues scenarios.

The dummy weighs 20kgs when dry. After a few minutes in the water the dummy takes on the water and assumes an upright posture with arms aloft.
For IRB Racing, the dummy attaches to the 'can' using a webbing leash with a velcro connection. The leash attaches around the neck of the dummy. As you grab the dummy with your arm through the dummies arms the velcro releases and you drag it into the IRB.
The weight you are hauling is the dry weight of the dummy plus the water that has soaked into the dummy, ~ 40+ kg Once in the IRB, the water runs out of the dummy and quickly returns to about 20 kg which makes for reasonably easy weight management.
The orange overall is made of polyurethane coated polyester which is resistant to salt water. Polypropylene webbing is stitched to the overall in all high stress points. Beneath the overall the carcass is a tough nylon mesh, as used in our standard water rescue dummy which has been used by NATO military rescue dummies for years.

• shortened to 1.5m to be more manageable for a range of rescuers
• dry weight reduced to 20kg, which increases to about 40+kg when pulled from the water
• weighting lowered from the torso to the hips to improve stability in a moving sea
• boots removed and replaced with durable PVC sleeves on lower leg to reduce drag during extraction
• arms are built aloft to simulate a volunteer 'patient' - no dislocated shoulders or wrists!
• a polypropylene loop to the back allows the manikin to be lowered into position or hung up to dry
• bright orange overalls and SOLAS reflective tape on the head make the manikins very conspicuous in open water
• polyethylene strips running from the shoulders to the knees allow flexibility in and out of the water but prevent the manikin from being too 'floppy'
• protective overalls are user replaceable and greatly extend the life of the manikin

Um eine Bewertung abgeben zu können, müssen Sie sich zunächst anmelden.
Accessories 1
Accessories 1
Ruth Lee Carrying Holdall , for rescue training dummies
Order number: AU-02330
€139.00
Viewed
This website uses cookies, which are necessary for the technical operation of the website and are always set. Other cookies, which increase the usability of this website, serve for direct advertising or simplify interaction with other websites and social networks, will only be used with your consent.
Decline Accept all Configure